What do you see in Marrakech?

What is it? The vast open square at the heart of the medina is one of Marrakech’s biggest attractions and is a Unesco world heritage site. Expect snake charmers, street entertainers and over-enthusiastic henna artists at every turn.

What is it? This 150-room palace was home to slave-turned-vizier Abu ‘Bou’ Ahmed, who spared no expense in its gorgeous decoration. The painted, gilded ceilings, polychrome zellige tiling and carved stucco still have the intended effect – which is just ‘wow’

What is it? Created by the French painter Jacques Majorelle, this botanical garden is home to more types of cacti than you can shake a terrarium at, and has a stunning indigo blue art deco house as its centrepiece.

What is it? The epic ruins of Sultan Ahmed el-Mansour’s once-magnificent palace, set within sunken gardens and surrounded by epic ramparts whose decrepit towers boast panoramic views over the medina.

This cemetery, which sits just south of the medina, features more than 160 tombs filled with the remains of prominent Saadians (members of an Arab dynasty who are reportedly descendents of the prophet Muhammad) and their advisors and royal wives. First used in the early 14th century, the Saadian Tombs’ intricate decor (think: cedar ceilings, colorful mosaics and Carrara marble headstones) was not added until the 16th century by Ahmed El Mansour. Unlike other ornate structures in the region, this property was not plundered by Sultan Moulay Ismail in the early 18th century, making it one of Marrakech’s only surviving Saadian sites.

What is it? Moroccan cuisine is famous for its rich, aromatic flavours. Place des Épices is the traditional spice souk where you’ll find merchants selling everything from allspice to ras al hanout (a mix of more than a dozen spices).

What do see in Fes city ?

Al Quaraouiyine, built in 859BCE by Fatima al-Fihri, is believed to be one of the oldest universities in the world. It now operates as a mosque and cannot be entered by non-Muslims. However, its library, renovated in 2016, is open to the public, and you can get a glimpse of the impressive, handmade tilework dating back to the 9th century. You can also get a perfect view of the mosque courtyard from the rooftops of nearby restaurants in the medina. 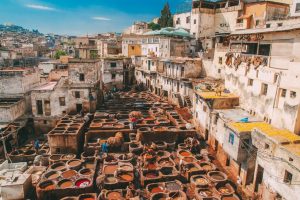 This is the most iconic place in Fez, and the oldest tannery in the world, where they still operate as they did in medieval times. Here, men make leather in a massive tannery surrounded by houses and shops. The smell of the dyeing process can get rather intense, so take a scarf to cover your nose (or they will give you mint leaves to rub under it). This is a great place to buy your leather souvenirs.

A historical landmark, the Al-Attarine Madrasa is located near the Al-Quaraouiyine Mosque and the Al-Attarine Souk, a market with a variety of local spices, dried nuts, fruit and much more. Built between 1323 and 1325 and named after the market, the madrasa was an annex to the mosque and is decorated with the same design; magnificent green and blue zellij tile work, carved plaster and cedar wood, plus classrooms indoors and a fountain in the courtyard.

Right at the entrance of the old medina lies the former theological college for Muslim intellectuals. Built by Sultan Bou Inan in the 14th century, it has been beautifully restored, featuring incredible mosaics, carved plaster, cedar mashrabiyas (lattice screens) and impressively large doors. The inside is splendid, with a fountain in the courtyard and endless, handcarved walls and zellij(mosaic) tilework. It also has rooms on two floors, where classes used to be taught.